Samplers have been around a long time. ‘Sampler’ or ‘exampler’ is from the Latin ‘exemplum’ and the French “essemplaire” meaning: ‘an example, model or pattern to copy’. Early samplers were used as records of pattern and stitch and were valued as a library of sorts by their owners. Over time, samplers began to develop more complexity. They were used as a practical reference, but also passed along skills as a teaching tool. Samplers became testaments to the stitcher’s skills and were believed to build moral character in the young women who stitched them. In modern times, samplers have become treasured as art pieces and as a resource for historians trying to understand the times in which they were created. This multifaceted nature keeps us intrigued to this day

The earliest known sampler was created in Peru.  Unsurprisingly it is in pretty bad shape, but considering that it was stitched sometime during the 2nd century, I’d say it looks pretty good! 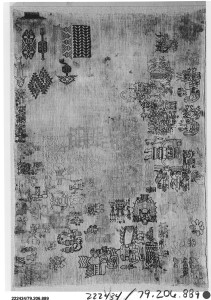 The Peruvian sampler is a good example of a ‘spot’ sampler, which is a sampler made up of single stitched motifs. Because the stitcher was interested in capturing ideas, rather than in the aesthetics of the finished piece, the motifs were stitched singly with no regard for pattern or composition. It is simply a record of patterns for future use. One thing I love about it is how the motifs reflect the Peruvian culture. There is no mistaking this for an 18th C American schoolgirl sampler! Yet, there are common threads between the two. Each is communicating a message in a unique language but I feel a connection between them.  I think that the use of similar materials and methods is a thread that connects us as stitchers, even across the barriers of time and distance. The idea that we can communicate with stitchers from the past is part of the reason that samplers remain a fascinating topic today.

Thank you to the Metropolitan Museum of Art for the image of this lovely sampler. You can see it at http://www.metmuseum.org/Collections/search-the-collections/50005755?rpp=20&pg=1&ft=206.889&pos=1

2 thoughts on “A Not-so-Short History of Embroidery Samplers, part 1”